Word for Wednesday – An uncommon life

After yesterdays Tea Time Tuesday exhortation to make the choice to live an “uncommon” life…I am posting my daughter Michelle’s valedictorian speech she gave this past June at JECHS graduation.  I hope it inspires you to live an uncommon life!

I have been brought up in a home of girls. Not only do I have five sisters, but on my mom’s side of the family there are 14 granddaughters and until just recently there were no grandsons. I know – it is almost unbelievable that after my parents had six girls that this year on April 20 they had a boy! We have always felt unique in being all girls! In fact whenever we go out shopping or to the movies we always wear our crowns and tiaras. We know we are princesses, and now we definitely have a prince – but don’t worry we won’t make him join the tradition of going around in a tiara! 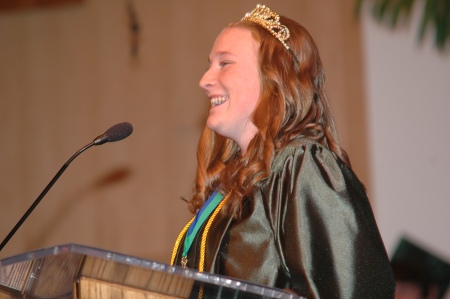 We are all royalty!

1 Peter 2:9 says, “But you are a chosen people, a royal priesthood, a holy nation, a people belonging to God”

Yes – We were once commoners, we were once peasants, we were once orphans until we were brought into the King’s palace and made part of His royal family. We have been crowned by the King of Kings!

So welcome kings, queens, princes and princesses to this celebration of the graduating class of 2007.

Now, what is our place in the King’s court? What has been given to us as our royal duty?

The answer is found in the second part of our scripture 1 Peter 2:9. The Message Bible says it this way, “We are God’s instruments to do His work and speak out for Him – to tell others of the night & day difference He made for us – from nothing to something, from rejected to accepted” and we could add from common to uncommon.We are called to live an uncommon life among the common to show others Christ and make a difference in the world for Him! We are all asked to do God’s work and to tell others about what He has done for us all. He has done so much!

Over 2000 years ago God sent His Son to die for the sin of all mankind. Each of us has sinned, none of us can make it to heaven on our own. We are weak, but the Lord is strong. He came down to earth in the form of a man to make a way for us to know Him and spend eternity in heaven. Most of us know the words, “For God so loved the world He sent His one and only Son” – His name is Jesus.

One of my heroes was most uncommon in his day. William Wilberforce was born the son of a wealthy merchant, and at the young age of 21 became a member of the English parliament. As an adult convert to Christianity, he penned these words in his personal journal, “God Almighty has set before me two great objects, the suppression of the Slave Trade and the Reformation of society.” It was not until after William asked Christ into His life that he knew he had an uncommon life to live. In 1807, the Slave Trade Act led by Wilberforce passed with a vote of 283 to 16.

Amy Carmichael was called to the mission field, she was called to save the lives of women and children. Amy started an orphanage for children on the streets of India. Because of the uncommon life Amy chose to live, her orphanage was a sanctuary to over a thousand children. She served in India without furlough for 55 years.

Just 10 years ago a group of uncommon Christians came together with the dream to start a high school. The vision was to start a discipleship school to train up young people to serve God and make a difference in the world. Jim Elliot Christian High School is a training ground to be uncommon amongst a common world.

The namesake of our school, Jim Elliot, lived with a passion that was uncommon to those around him. God called him to the Auca tribe down in the jungles of Ecuador, a tribe that was yet to be reached with the gospel. It took a man like Jim Elliot and those with him to take on the daunting task of reaching such a fierce tribe.

What will you do to make a difference? Like these men and women what is God calling you to do?

Whether you are 17 or 70 God is calling you to an uncommon life. He has a great adventure for you, a plan to use you to show others how He brought you from the darkness into the light.

Let me assure you that this will not be easy, and you will face many obstacles and much opposition. Some of the opposition will even come from your closest friends and family, maybe even other Christians.

Wilberforce struggled for 20 long years to abolish the slave trade; his health suffered and he faced opposition not only from those against him in Parliament but eventually even from his closest friend and supporter, William Pitt.

Amy Carmichael was not the best candidate for the mission field. From birth she struggled with a disease of the nervous system that caused her much pain and forced her to be on bed rest for long periods of time.

I remember very well the year that Elliot was founded. There were many doubters that this school would ever exist. People commented “It will never happen”, “No one will apply for a school that doesn’t have a building yet!”, and “You will never have enough money”. But, here we are years later and the students sitting before you are the 9th graduating class of Jim Elliot Christian High school.

As God was with these men and women so He is with you. This is His plan for your life and if He is for you than who can be against you.

Graduates, I hope to one day see Jana Wall rescuing orphaned children overseas, Ernie DeLosAngeles touching the lives of young people, and Amanda Collins using her photography skills to show the hunger and need in the world.

As some of you know we also have an ambassador of Christ in our class going to Norway. I can’t wait to hear how Cecilia Hallberg is changing her homeland for the Lord!

I hope that one day my name will be among those responsible for the saving of millions of babies from the atrocity of abortion. Or maybe I will be an investigator with International Justice Mission working to end oppression across the nations.

And so I ask what will you do to make a difference? How will you affect this world to further the kingdom of God? How is God calling you to stand out and be different?

This is not a time of common men; this your time to be uncommon! 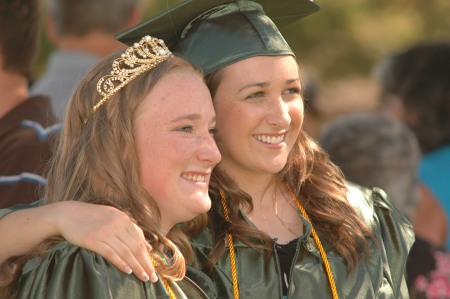 These two ’07 JECHS graduates – Michelle & Jana are already living an uncommon life as they serve in short term missions in Africa!

One response to “Word for Wednesday – An uncommon life”