A Season of Sacrifice – Observing Lent

Last Wednesday we began our yearly observance of Lent.  The season of Lent is yet another great opportunity to teach our faith to our children throughout the year. For those of you who are new to these more traditional religious  observations let me give a quick overview of Lent.

In most Christian denominations, Lent is the forty-day liturgical season of fasting and prayer before Easter.The forty days represent the time Jesus spent in the desert, where, according to the Bible, he endured temptation by Satan.

The purpose of Lent is the preparation of the believer—through prayer, repentance, almsgiving and sacrifice—for the observation of the Death and Resurrection of Jesus, as celebrated during Holy Week.

Lent lasts from Ash Wednesday through Holy Saturday. The six Sundays in Lent are not counted among the forty days because each Sunday represents a “mini-Easter”, a celebration of Jesus’ victory over sin and death.

The color of Lent is purple, a sign of penance and prayer.

We normally begin our Lentan observance on Ash Wednesday.  We have a devotional service that includes Dan putting ashes on each of our foreheads. Ashes are an ancient symbol of repentance (sackcloth and ashes). They also remind us of our mortality (“Remember, O man, that you are dust, and unto dust you shall return” Genesis 3:19) and thus of the day when we will stand before God and be judged. To prepare well for the day we die, we must die now to sin and rise to new life in Christ. Being marked with ashes at the beginning of Lent is a visual reminder that we need to prepare ourselves for that day that we will all die.

We share with our girls the importance of this Lenten season as a time to spend in self reflection, repentance, in drawing closer to the Lord and in sacrifice.

As a family we have chosen to continue a family tradition that I grew up doing called – the “sacrificial meal”.  Every Wednesday night during Lent, we have a meal that consists of only three things:

We give up our normal full meal that includes a wide variety of food – meat, vegetables, breads, salads and sometimes dessert – and use the money we save to give to the poor and hungry in our community.  We also share with the girls that a large portion of the world lives on rice and water (and many have no clean water!). We have so much to be thankful for!

Ok so I know many of you are wondering…why pretzels?

The pretzel has its origins as an official food of Lent.

According to pretzel maker Snyder’s of Hanover, a young monk in the early 600s in Italy was preparing a special Lenten bread of water, flour and salt. To remind his brother monks that Lent was a time of prayer, he rolled the bread dough in strips and then shaped each strip in the form of crossed arms, mimicking the then popular prayer position of folding one’s arms over each other on the chest. The bread was then baked as a soft bread, just like the big soft pretzels one can find today.

Because these breads were shaped into the form of crossed arms, they were called bracellae, the Latin word for “little arms.” From this word, the Germans derived the word bretzel which has since mutated to the familiar word pretzel.

Tonight the girls and I, who are at the beach house, had our weekly Wednesday sacrificial meal.

I spent some time teaching them again about Lent and its purpose. I shared with them the reason for our sacrificial meal and the symbolism behind the pretzels. We spontaneously began singing some worship songs and then closed with a time of prayer asking the Lord to help us to focus on service and sacrifice as well as spending more time in His Word and prayer during this Lenten season so that we might become more like Him. 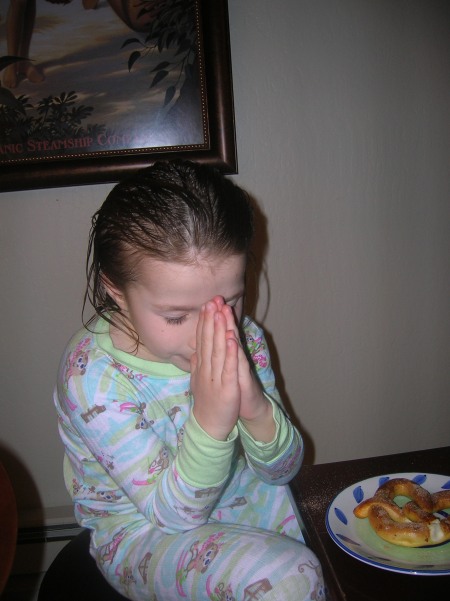 I pray that you too will look for ways to observe Lent with your family and that your faith will be renewed and refreshed during this season!

3 responses to “A Season of Sacrifice – Observing Lent”